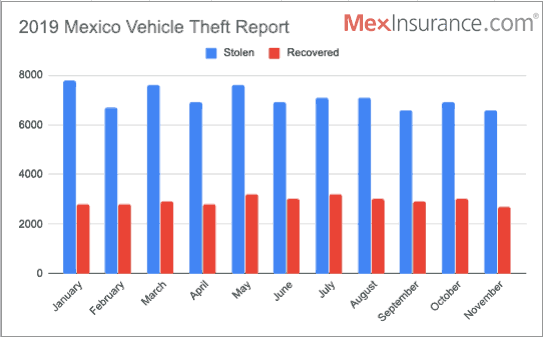 I just received the Mexico Vehicle Theft report for 2019. The results reflect December 2018 through November of 2019. According to these numbers, automobile theft in Mexico is down for the first time since 2015.

The numbers come raw (and in Spanish) from AMIS (Asociación Mexicana de Instituciones de Seguro) in Mexico. Below we organize and chart the data for you. But, except for the alarming car-jacking figures, most U.S. vehicles appear off-radar for thieves. And in particular, the tourist towns and border states seem to be comparatively safe from theft. Vehicle recovery is also consistently in the 40% range throughout Mexico.

Vehicle Theft in Mexico By State 2019

Surprisingly, the insurance companies manage to recover nearly 40% of stolen vehicles in Mexico.

Most Popular Vehicles Among Thieves in Mexico 2019

So, which vehicles are most popular among thieves in Mexico? For the most part, the top 15 vehicles stolen in 2019 were the most popular in 2018, and 2017. Nissan is the biggest target, but not the U.S. makes of Nissan. The Tsuru and NP300/Pickup top the list again this year, followed by the Versa and the GM Aveo.

With insurance, vehicle theft is the least of your worries. But carjacking? Nobody wants to get jacked. In Mexico, they call it “robo con violencia,” or theft by violence. It is a concern to me that more than 50% of vehicle theft in Mexico is by carjacking. I suppose it’s a great way to take a car without having to hotwire the system or break the windshield and door mechanisms. Carjacking is a method of choice in Mexico. The good news for tourists, we have the data on which cars are most likely to be carjacked and where.

Where in Mexico are you more likely to be suffer carjacking?

Which Cities are at Risk of Carjacking?

From this chart, you can see that Carjacking events declined last year compared to 2018 in most of the major cities except Celaya (Guanajuato) and Tonala (Jalisco). Zapopan (Jalisco) is still on the rise, but not at the clip of those above.

What Cars are Most Common to Carjack by Thieves in Mexico?

Fortunately for tourists and clients, we don’t see a lot of these across the border. It looks like most carjackings happen to Mexican-registered (with Mexican license plates). Which also makes sense. It is illegal for Mexican nationals to drive a foreign plated vehicle. These thieves would not be wise to draw more attention to themselves.

Below is the final auto theft tally for each state, since 2014. The annual listings represent December to November of the following year. For example, heading 2013-2014 represents data from December 2013 through November of 2014.